1.) Unless a person is coughing up blood with the menses (Catamenial Hemoptysis), they do not have Thoracic endometriosis.

False.  The location of the lesions determine the manifestation(s) that develop with disease progression.  If the lesion(s) are located in the larger airways (bronchi and bronchioles) or in lung tissue very close to an airway, this often results in coughing up blood.  The sputum may be streaked with blood or more ample (5-50ml/2-3 tsp. per day) (1).  Those with Catamenial Hemoptysis  (CH) are a small portion (approx. 7-14%) of those with disease involving the respiratory system. (2,3)

Do you or someone you know cough up blood tinged sputum?  To learn more please please read:

Notice: Thoracic Endometriosis is missing from the list of causes (we added it for our purpose).  There are many causes for blood-tinged sputum.  However, recurent hemoptysis (coughing up various degrees of blood in the sputum during menses (most often as the menses starts) is highly suspicious of endometriosis located in the bronchial airways and communicating tissues of the lung(s).  To learn more about the condition please read:

False.  Historically it was speculated that only 3-6% of all Spontaneous Pneumothoraxes (SPT) were considered ‘Catamenial’ (CP).  Modern estimates, based upon larger studies, report 34%-35% of all spontaneous pneumothoraxes in women are related to endometriosis.  The majority (approximately 25% occurring during the ‘Catamenial’ time period and a smaller portion (approximate 8-9% are non-catamenial/TERP) (1-6).

False.  There is speculation that not all Catamenial Pneumothoraxes which occur at the time of menses are the result of endometriosis. This perception is due to the lack of histological findings across all cases of CP> CHt>Ch.  Despite inconsistent ability to obtain histological samples from all cases (1,2,3,4), other intra-operative findings, defects and timing of pneumothorax with the menses, aligns with hormone levels that promote decidualization of endometriosis to create CP (2,3,5,6,).

Lillington and colleagues, who coined the term ‘Catamenial Pneumothorax’, proposed that pulmonary endometrial implants may swell inside terminal bronchioles during the menstrual period, thus causing localized hyperinflation by check-valve mechanism, which, in turn, might cause pneumothorax…..may explain cases of CP without diaphragmatic abnormalities…                – Alifano et al. 2006

The gold standard for diagnosis is histological confirmation. However, ‘clinical probable diagnosis’ is often made based upon supportive findings. Young-Rang et al. captured cyclical changes in the lung parenchyma of a 24 yo woman who was symptomatic menses AND captured cyclical changes within the lung parenchyma on CT scans (4). Despite classic image features, surgical biopsy did reveal presence of glands and/or stroma. However, based upon imaging characteristics, catamenial timing, other pulmonary conditions ruled-out, and features of biopsy can establish a diagnosis based upon clinical evidence.

A large sample size study, which grouped subjects with history of CP w/o histological findings with those (+) histology for TE was completed in 2011 (8). They created a differential diagnostic probability in attempt to improve diagnostic accuracy for CP/TE. Sensitivity and Specificity was established for specific symptoms, clinical characteristics and medical history.  The authors specifically commented that the medical history among both sets of patients were oft the same.  Recurrent pneumothorax was high among both populations compared to idiopathic Primary Spontaneous Pneumothorax (PSP). Both groups had similar precursor symptoms, gynecological procedures or other uterine manipulation. Further investigation of those with CP, they report:

Obtaining histological confirmation is also a challenge in cases with second and third most frequent manifestations of TE: Catamenial Hemothorax (CHt) (10) and Catamenial Hemoptysis (CP) (11,12). But with higher rates of confirmed pathology.

Among cases with Catamenial Hemoptysis (CH), complete resolution of lesions between menses is common. Most examiners recommended bronchoscopy (and CT Imaging) immediately prior to onset of menses or at commencement for visual inspection with bronchoscopy or CT Scan (11,13,14,15) .  There are limitations of bronchoscopy. Therefore,  CT Scan is also helpful to locate disease, which occurs more frequent in the lung periphery where bronchoscopy cannot provide direct visualization.  In most cases, lesions can then be removed via Video-Assisted Thoracoscopic Surgery (VATS) (16-22).

The fourth manifestation of Lung Nodules are frequently asymptomatic, without clinical presentation but imaging confirms their presence (17).

4.)  A Pneumothorax which occurs outside the Catamenial period cannot be associated with endometriosis. 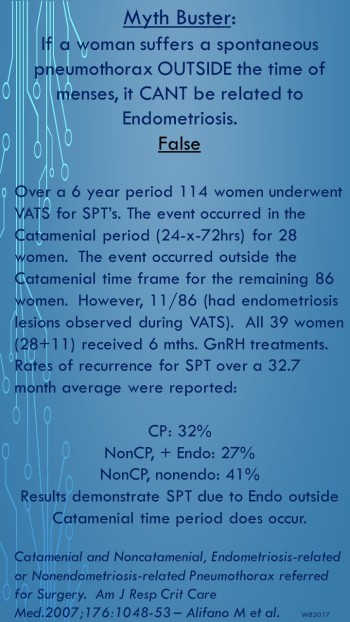 False. Thoracic endometriosis has been documented across the entire spectrum of endometriosis staging and sample sizes. Cases have ranged from isolated lesions of the respiratory system without any pelvic disease to sample sizes with stage I-IV.  Most studies simply report pelvic endometriosis as present/absent.

Data collected from case and case series reports for 110 patients between Jan 2001 through July 2007 analyzed the relationship between pelvic disease and manifestations of TES (7).

Until recent, those with complaints of catamenial respiratory, or cyclic chest pain, were identified through a previous diagnosis of pelvic disease. More recent, the cyclic, catamenial presentations are beginning to identify women with isolated respiratory or co-existent pelvic disease (*) before investigation of pelvic symptoms.

6.) All thoracic endometriosis results in a lung collapse.

False.  The most common symptom of respiratory involvement is Catamenial Chest Pain. A smaller portion of those with TE develop one of the four manifestations, CP is the most common. As mentioned in Myth Buster #1, an estimated 3/4 of those who develop manifestations of TE (can be measured with imaging or other testing) develop a lung collapse (1,2).  Suspicion is increased if it is cyclical (peak symptoms at peri-menses but may extend to ovulation then progress 24/7 with peaks at these times) and repetitive.

7.)  If nothing abnormal shows up on imaging or scans, endometriosis can’t be present.

False. Negative imaging is a common occurrence with TE (1,2).

Clinical ‘probable diagnosis’ justifies investigation if repetitive (does not have to occur with every menses but is common) and present in a adolescent to perimenopause, despite negative imaging.  However, increased probability to detect disease with imaging  concurrent to menses AND when symptomatic.  See Myth Buster #10.

8.) Thoracic endometriosis only occurs on the right side of the body.

False.  Although the majority of reported cases involve the R. thoracic cavity, it is important to realize that left sided and bilateral chest disease occurs.  Some researchers have even noticed a trend in left-sided disease among younger individuals. 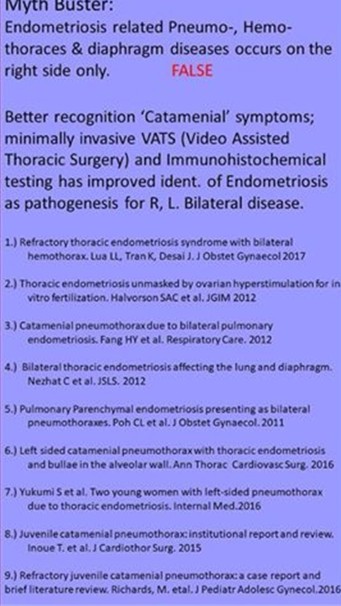 9.) Despite report of symptoms suggestive of diaphragm disease, if There are no visible signs of endometriosis seen at laparoscopy,  and        entire diaphragm (including the area posterior to the liver), is assessed, No endometriosis is present.

False.  Among people in the online support group, TE: Endometriosis of the diaphragm and thoracic cavity support and education group report being dismissed by numerous surgeons for diaphragmatic disease after laparoscopic inspection of abdominal side diaphragm revealed no lesions. Based upon laparoscopy, performance of VATS to inspection the thoracic side diaphragm was not performed.  With no relief or worsening of symptoms, many of our members sought out a gynecologist and thoracic surgeon excision team whom later confirmed the presence of disease.

Despite a large literature review, specific documentation of thoracic vs abdominal side diaphragm disease, one article supports the fact that thoracic-side (visceral surface) diaphragmatic disease can occur (1). In a report of 25 subjects who underwent combined VATS and Laparoscopy for complaints suggestive of thoracic disease, 4/25 (16%) had visceral side lesions only. The majority, 19/25 (76%) had lesions on BOTH surfaces of diaphragm and only 2/25 (8%) had abdominal side lesions only.  If these statistics could be inferred to a general population, the general perception that diaphragm disease is more common on the abdominal side is inaccurate.

Although limited publications exist which clarify exact location of diaphragmatic lesions, within our support group, disease confined to the thoracic side occurs.  Many of our members were dismissed of disease based upon clear abdominal side diaphragm.  A second surgery with a Thoracic Surgeon on the team was necessary to confirm, excise and repair defects.

10.)  A hysterectomy is a cure for Catamenial Pneumothorax, with or without removal of the ovaries, ‘cure’s’ the disease.

False.  IF lesions occur on the diaphragm AND they create full-thickness holes in the diaphragm, it IS possible that prevention of further collapses.  This is possible IF the case scenario supports the theory of air entrance through the cervix at time of menses, passes through defects in the diaphragm created by endometriosis that results in higher external chest cavity pressure inward on the lung tissue for a collapse to occur. The concern here is removal of the uterus without addressing active lesions of the diaphragm.

A 43 yo female continued to have recurrent pneumothorax six years after hysterectomy (1). At time of hysterectomy the endometriosis lesions on the diaphragm and lung tissue where not treated.  A second surgery was performed with treatment of lesions in these areas with (B) Vats and concurrent Laparoscopy.  The patient had both ovaries removed at the same time as thoracic lesions were removed.  It is unclear how long the post-operative period of time was before her case went to publication reporting no recurrences. With treatment of lesions and removal of ovaries it is unclear if she would have remained symptom free and benefited from retention of her ovaries.

11.) A Magnetic Resonance Image (MRI) is best to detect endometriosis lesions of the respiratory system.

True and False.  It is True to best reveal lesions of the diaphragm and parietal pleura (lining of the chest wall and thoracic side of the diaphragm. Not for all presentations of disease on the diaphragm or pleura is seen, however lesions undergoing hemorrhage or presence of nodules within these structures are often well delineated with MRI imaging (1,2).  False for lung parenchyma.

The composition of lung parenchyma and longer ‘capture’ time to needed for MRI imaging makes CT Scan best tool for imaging lung parenchyma (3).  Although CT does not portray the same detail for soft tissue structures such as the chest wall and diaphragm, it has the ability to identify pneumothorax, hemothorax and lung nodules (which demonstrate cyclical changes during symptomatic periods). Other irregular findings associated with endometriosis within the lung tissue include:

False. This is particularly true among people who have a history of lung collapse prior to pregnancy.  During gestation, hormone production is drastically altered. As a result, pre-existent lesions may deciduate and/or slough off. If the lesions are located in specific areas (ie outer surface of the lung) that leads to altered integrity, a pneumothorax may result.  Although a pneumothorax may occur at any time during pregnancy, this study noted the second trimester had the highest frequency (1,2).

14.) A person who experiences a spontaneous pneumothorax due to endometriosis (that may be Catamenial or TERP has the same probability of recurrence as a Primary Spontaneous Pneumothorax (PSP).

False.  A PSP is more common in  among persons assigned males at birth. They may be the result of genetic predisposition, congenital, premature birth or rapid growth during puberty. A pneumothorax due to endometriosis is considered a Secondary Spontaneous Pneumothorax.  ‘Secondary’ associates a pathological disease to the cause. In 114 subjects, recurrence rates were 32% among CP, 27% among non-CP endometriosis-related and only 5.3% recurrence in those with PSPT (1)

Looking for a support and education group?  Extrapelvic Not Rare: Support and Education Group 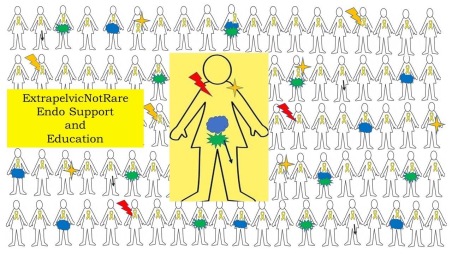