To clarify, ‘extrapelvic endometriosis’ includes both ‘extragenital’ and ‘extrapelvic’ categories of disease.  For further clarification of disease classifications please refer to our page:  We represent who? .

A lack of large scale prevalence studies and detailed diagnostic coding to track endometriosis throughout the body, lends us to ‘best guess’ the prevalence of extrapelvic disease based upon the data collected to date from multiple studies with recurrent statistics. 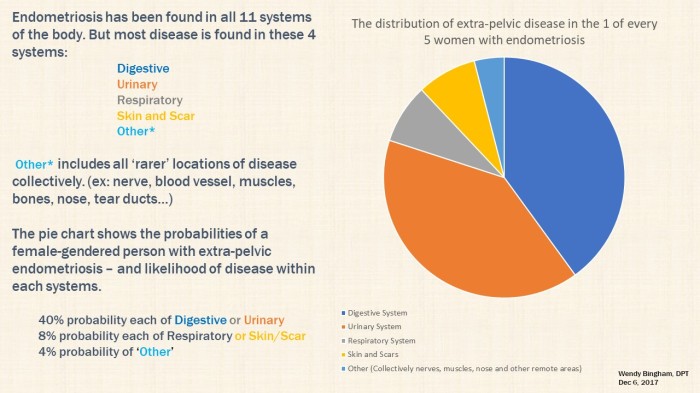 To view the ‘ABC’s of Extrapelvic Endometriosis’ lesions and their locations which have been identified throughout the body (as of May, 2020) please click here:

ABCs of Extrapelvic Endometriosis with Citations 2020

Through the years, publications of ‘rare’ or ‘unusual’ endometriosis lesions in atypical regions of the body have been documented.  Some areas are ‘single episodes’ while others demonstrate patterns of progressively reported involvement of specific body systems over time.  As of May 2018, the following extrapelvic locations are confirmed with open-access literature (a few citations required a fee).  Documentation of lesions identified throughout all eleven (11) body systems justifies further investigation into alternate theories of pathogenesis for endometriosis. Why is this important?

Most models of disease are based upon Sampson’s Theory of Retrograde Menstruation.  The following information provides a brief overview of a variety of theories about WHERE endometriosis comes from and WHAT causes it.  When discussing endometriosis, it is very important to question the ‘status quo’ idea of where endometriosis comes from.  Hence, a brief overview of each traditional theory is provided. Other significant areas of interest and consideration are also included.

Before consideration of HOW lesions ‘arrive at’ or ‘evolve from’ sites, the fundamental ability to recognize the diverse appearances of lesions and their relationship to age and composition is important.  Dr. Dan C. Martin granted permission to share publication of: “Laparoscopic Appearance of Endometriosis – Color Atlas. Second Edition, web revision 2017 (original copyright 1990).  View real lesions and details; link here:

The four authors include: Martin DC, Redwine DB, Reich H and Kresch A. A downloadable PDF, among many other resourceful information, and is regularly updated, is found at:

Endometriosis presents itself in so many ways, its still not explained how it ‘gets’/’is found’ in so many places? Perhaps they originated in these tissues? Perhaps they transformed from cells meant to ‘repair and replace’ older cells.

Theory of Mullerianosis (1,2) – Original theory developed in 1885 by Von Recklinghausen and modified in 1942 by Grunwald.  This theory postulates that endometriosis is the result of specialization of previously undefined cells of undeveloped elements of residual genital-reproductive tracts found in both males and females. (3)  These cells are postulated to remain sensitive to hormonal influence. (Examples of this theory in application include endometriosis found within males who are not transgender.  Some males whom have undergone estrogen based hormone treatments for other conditions (4) and males w/o hx. hormone treatment with high adipose levels which may enhance estrogen levels within the body (5,6). (aka – Embryonic Remnant Theory)

Theory of Metaplasia (2) – Originally developed in 1903 by Meyer. This theory proposes that tissues and organs that originate from cells found in the same layer (the mesoderm – middle of three layers) during embryological development, within the first few weeks after conception (combination of sperm and egg that begins cellular division), can differentiate into other cells of other organs that originate from the same layer (ie. reproductive organs like the uterus, abdominal and thoracic cavities, diaphragm, muscles are all examples of organs and tissues that originated from the mesoderm layer).  (aka – Coelomic Metaplasia Theory)

Theory of Transplantation (2) – in 1924 Halban proposed that extra-pelvic disease occurred as a result of lymphatic vessel distribution. In 1925 Sampson further postulated that disease originated from distribution through the blood (hematologic). Most specific via (Theory of) Retrograde Menstruation in which the cyclical shed of the uterine lining (endometrium) is sloughed off. Normally it is expelled through the cervix, when it is open at menses, however a portion tends to flow backwards out the open-end (fimbria), of the fallopian tubes into the abdominal cavity.

Theory of Induction (2) – A theory which postulates that the physical process of retrograde menstruation (Theory of Transplantation) and ability of the undifferentiated cells that are shed (that originate from the same germ layer as those that can transform into other organs) results in the attachment and conversion of these cells to ‘endometrium-like’ cells. (aka – Induction of Cellular Transformation Theory)

No SINGLE theory explains all presentations of endometriosis.  Furthermore, scientific investigation continues to find data with specific associations that suggest genetic and environmental (internal and external) factors may contribute to the disease.  Among these factors include (7):

Perhaps ‘uncommon’, ‘infrequent’ or ‘exceptional’ instead of ‘Rare’

Scientific literature continues to accrue with reports of endometriosis throughout the body.  It is important to also realize that, due to the nature of some locations of extrapelvic disease, it is inappropriate to believe that case reports and small sample size studies cannot be ‘generalized’ or sufficient strength in its content simply because they are not larger sample sizes.

Many surgeons whose patient population is nearly or completely comprised of those with endometriosis, dedicate their time and talents in the operating room. Unless these surgeons are affiliated with large teaching hospitals and research centers, where understudies can assist with literature review and number crunching, as well as available financial compensation (which is most often through government grant applications but even greater proportion from the pharmaceutical industry – which has little-to-no interest in extrapelvic disease), it is safe to state that many, many, many cases of endometriosis in ‘atypical’ locations go unreported and published.

Last, the invention of a tissue bank holds great promise to accelerate the understanding of this disease and its variations of phenotypes.  Perhaps this tissue bank will collect specimens from  different extrapelvic locations.   Why is this important?  To support and refute alternate theories of origins.  Jagirdar et al.’s necropsy of 10 Baboons with lesions in the lung parenchyma observed that lesions in the lungs contained a factor (TTF-1) which was NOT present in the lesions of the abdominopelvic cavity of the same baboons (9)