A very, very small portion of those with endometriosis have cutaneous lesions.  Among these persons, only a minute portion (abt. 1%) will develop lesions which transform into one of the three skin cancers. (1-6)  It is important to also recall, some with cutaneous lesions do not have endometriosis anywhere else in the body (link here: Cutaneous Endometriosis .)

A risk for development of skin cancer is not only present among those with cutaneous lesions, but all persons with a diagnosis of endometriosis of other body systems whom have an increased risk to develop skin cancer. (7,8)

First, its important to review the ABCDE’s for Skin Cancers that every person should regularly check their skin, not just the arms, legs and face, but also the front and back torso, even if you always cover up! 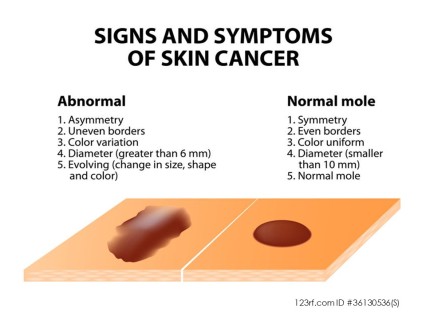 A: Asymmetry of border

B: Border around lesion is not consistent

C: Color of lesion is not uniform

D: Diameter across lesion is > 6mm.

A person does not have to have ALL (5) of these, and bleeding from the lesion to justify a visit with the doctor.  Any changes are important.  Taking photographs and writing measurements down of lesion size to compare them over time is a helpful way to document changes the physician can see.

Most common type of skin cancer.  Flesh to pearl color bump or pinkish patch of skin.

Deadliest form of skin cancer.  Develops in a pre-existing mole or a new dark spot on the skin.

Some skin lesions characteristically bleed.  Not all skin lesions are malignant, some are benign, however, it is very important to seek medical attention early to rule out the presence of a cancerous (malignant) lesion.

Note that the cutaneous endometriosis lesions did not transform into ANY of the above three primary skin cancers.  The tissue of endometriosis lesions are similar to that of the endometrium of the uterus.  As such, Clear Cell Carcinomas (aka Clear Cell Adenocarcinoma’s) and Endometriod Carcinomas (aka Endometriod Adenocarcinomas) are usually found among the female genital tract. (10)

Clear Cell Carcinomas have been reported within endometriosis lesions within cesarean scars (1,2,4-6), laparoscopic incision scars for treatment of Ovarian endometrioma (5) and umbilical incisional endometrioma following laparoscopic treatment for uterine myoma (fibroid)(3).  All women in these cases were over 40 yrs of age with remote time from origin of surgical scar. (1-6)

Endometriosis Diagnosis (not isolated to cutaneous endometriosis) and Risk of Skin Cancers:

What is the probability that a person with endometriosis (anywhere in the body) will develop malignant skin cancer?

Is one form of skin cancer more likely to develop than others?

“Endometriosis and melanoma may thus share a common etiological genetic aspect(s), and the results we observe may only be a reflection of correlated factors”

“Because this disease appears to be a risk indicator for cutaneous melanoma, gynecologists may play a role in melanoma prevention by alerting patients with endometriosis of their higher susceptibility to the disease”   – Kvaskoff M. et al (2007)

If a cis-female person has a 1st degree relative (parent, brother or sister, children given birth to) with history of melanoma could this determine the probability a cis-female’s probability of developing endometriosis?  The results from a study which followed 116,430 women (aged 25-42 yrs) over 20 years, concluded the risk was ‘slightly elevated’ to develop endometriosis but those with ‘moles’ on the lower legs and/or increased sensitivity to the sun had significant probability of endometriosis. (11)

Although the study discussed was a very large sample size of 98,995 women the results numerous large scale studies in other regions of the world and age groups must be gathered.  All their results then pooled together.  The more large studies gathered, the more valid the findings can be applied as representative of the real relationship between endometriosis and melanoma and personal characteristics (age, region, genetic and/or environmental factors etc).

Melanoma of the skin is the result of former ‘freckles’ or ‘moles’ which transform into malignancies. (9)

Melanoma’s most common origins (Primary) are the skin, uveal (eye), hard palate (roof of the mouth) and vulva (external genitalia area of females).  However, the uterus is also a location in which melanoma can originate from (primary) or metastasize to (secondary site). (12)